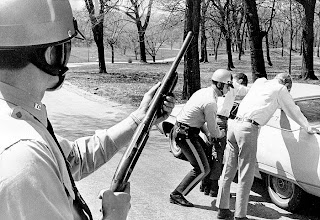 Man o' Law is scratching his head over this one.

WTF? Maybe it was an organized major joyride?

(CNN) -- The owner of a Nebraska car dealership and two executives were in police custody facing theft charges Thursday after 81 cars were taken from the dealership's lot, authorities said.

Police became aware of the case Tuesday, when they received a call from Toyota company officials, Spencer said. Toyota told police they had received a call that all of Legacy's new Toyotas were gone from its lot.

Employees arriving at the dealership for work on Tuesday also found the three executives gone, police said. They had packed up their personal possessions. Some computers were gone, as well. Fait and Patch's homes in Nebraska were on the market and empty, Spencer said.

In all, authorities found, 81 vehicles -- mostly Toyotas but some Fords as well, valued at more than $2.5 million -- had been moved off Legacy's lot over the weekend and on Monday. At least some of them were moved by a Utah transport company that was paid with a fraudulent cashier's check, Spencer said.

Authorities have been trying to track down the cars, he said. Seven of them were found at a Utah auto business; 16 others were sold at a Utah auction. Others were found in Las Vegas, Nevada, Spencer said, but police do not have an accurate tally of how many remain missing.

The FBI has been assisting local authorities in the case from the beginning, Spencer said.

The cars weren't the dealership's to sell free and clear. While they technically belonged to the dealership, they were financed by Toyota, he said.

New cars come to dealerships with documentation called a Manufacturer's Statement of Origin. Police investigating the case found that those statements had been converted to titles, Spencer said. While such conversion is not a crime, and is not unheard of among dealerships, the step usually is seen when a dealership goes under and is trying to expedite the sale of vehicles, he said.

What a dealer can do with cars depends on a dealership's agreement with the manufacturer, Spencer said. Police are attempting to find out details of Legacy's agreement with Toyota, he said, but "normally as part of that agreement, [the cars] are not to leave the dealership."

"We're of the opinion they've committed a crime," Spencer said. Arrest warrants for the three list each as facing one count of felony theft, he said.

The dealership had been facing financial difficulties, Spencer said. The Scottsbluff News-Herald reported a bank had been overseeing Legacy's day-to-day operations for about three months.

According to the newspaper, the owner of a Utah auto auction said that some of the vehicles had been sold at his business, but he declined further comment, saying he was seeking legal advice because he was trying to work things out with Toyota.

Doug Bergener, a manager at Bargain Buggys in Tooele, Utah, a suburb of Salt Lake City, told the newspaper he offered to buy 10 used vehicles from Legacy after hearing they were shutting down. But the vehicles that arrived were brand new, he said. He had sales pending on four before he got a call telling him not to sell them.

He told the News-Herald that he's known Patch and Fait for years, and that Patch told him he had paid for the vehicles and had titles.

"I don't think anyone can prove anything's illegal at this point," Bergener said, according to the News-Herald. "We've known Allen for 15 years and never knew him to do anything underhanded. There's been no reason not to trust him. He's always been honest. It'll all come out in the wash."
Posted by Sam at 7:28 AM