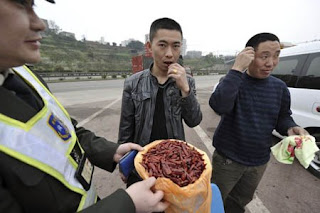 It could be considered cruel and unusual punishment.

Drivers in China are being forced to eat raw chilli by police to stop them falling asleep at the wheel.

It is a traditional Chinese belief that people often feel more sleepy in the spring, the Chongqing Evening News said.

"It's really good to have some hot peppers when you are tired from driving," van driver Chen Jun was quoted by the newspaper as saying. "They make you alert."
Posted by Sam at 7:34 AM