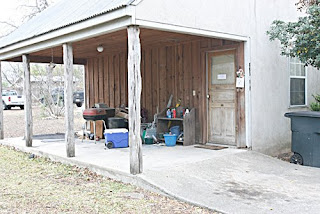 Though a New Braunfels man was arrested just 30 hours ago and accused of producing methamphetamine in his house, the effects of his actions will linger for years.

Steven Stuckey, 46, was arrested in San Antonio during a routine traffic stop when the officer spotted something suspicious in his car, San Antonio Police Department spokesman Joe Rios said.

The officer found meth and marijuana in Stuckey’s car and linked him back to his home at 480 1⁄2 Comal Ave. in New Braunfels, Rios said. In that house, police found a fully operational meth lab.

Susan Tate, who leased out the property and runs her attorney services out of an office on the same property, said she had no idea Stuckey was making drugs right behind her.

“He’s rented from me for the past five years,” Tate said. “He was an excellent tenant and almost always paid on time. More times than not, he kept to himself. He never presented any problems.”

She said she never smelled or saw anything suspicious going on in the house.

“I’m certainly upset that he would do that on my property,” she said. “I don’t view him as evil, though. It’s a shock and a surprise, but I just hope that he is OK.”

Stuckey has been experiencing a life-threatening illness in the past five months, Tate said, adding she was concerned for his health.

She said although the state does not necessitate it by law, she will bring in a specialized cleaning company — Texas Decon — and give full disclosure to any future renters on the property.

Slippin said the residue from a meth lab can contaminate a house — and everything inside — for years, even after the lab has been shut down.

“I’ve had to throw toys and children’s clothes away from innocent people just because they moved into a house where someone produced meth before,” he said. “A family in Grapevine had their dog die just within a month of moving in because the contamination was so high.”

Since Texas has no regulations, Slippin said his company pulls from other states’ laws when it works locally.

He said the only law set in Texas is that the private property owner has to disclose if there was a meth lab.

“Most of the times that person is the dope addict,” he said. “Who knows if they will ever disclose that kind of information. More regulations need to be set in Texas.”

As of Wednesday night, Stuckey remains in Bexar County Jail in lieu of an $11,000 bond with charges for possession of methamphetamine from 4 to 200 grams and possession of marijuana from 0 to 2 grams.
Posted by Sam at 7:18 AM