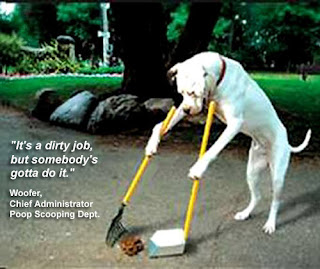 I'm sure there is more crime occurring in Germany than dogs pooping in the streets to be concerned about.

A German lawmaker proposed on Monday a novel and high-tech way of dealing with the menace of dog poo on the streets: DNA testing to identify the canine culprit and fine its owner.

Peter Stein, a conservative politician in eastern Germany, told AFP that under his proposal, officials would test the excrement and then match it up to the offending dog using a DNA database of all pooches.

German dog owners are fined 30-40 euros (40-50 dollars) if they fail to clean up after their pets, but very few are caught, with only four fines given out in Stein's hometown of Rostock -- human population 200,000 -- last year.

"Just saying 'it wasn't my dog' will not wash any more," Stein said.