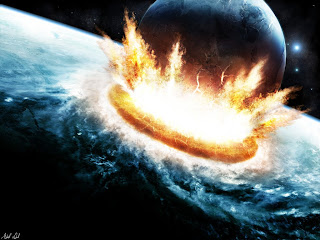 Be prepared! I guess.

I mean who knows right? Were you aware that an asteroid passed within 40,000 miles of the Earth last week?

If you don't know the Moon lies an average 240,000 miles away so the asteroid passed between the Earth and the Moon. Let it strike New York City and the "prophetic" vision is very easy to believe.

I'm not saying one way or another, I'm just sayin'

A respected pastor, best-selling author and founder of a major ministry to teens predicts an imminent "earth-shattering calamity" centered in New York City that will spread to major urban areas across the country and around the world – part of what he sees as a judgment from God.

David Wilkerson, author of "The Cross and the Switchblade," a book about his ministry to troubled New York street kids that was later made into a movie starring Pat Boone, tells readers of his blog this weekend that he is "compelled by the Holy Spirit to send out an urgent message" about his prediction.

"An earth-shattering calamity is about to happen," he writes. "It is going to be so frightening, we are all going to tremble – even the godliest among us."

Wilkerson's vision is of fires raging through New York City.

"It will engulf the whole megaplex, including areas of New Jersey and Connecticut. Major cities all across America will experience riots and blazing fires – such as we saw in Watts, Los Angeles, years ago," he explains. "There will be riots and fires in cities worldwide. There will be looting – including Times Square, New York City. What we are experiencing now is not a recession, not even a depression. We are under God’s wrath. In Psalm 11 it is written, "If the foundations are destroyed, what can the righteous do?"

Wilkerson is the founding pastor of Times Square Church in New York City, where he launched a ministry to gang members and drug addicts in 1958. He is a highly regarded mentor to other pastors in evangelical circles and travels the world holding conferences for other Christian ministers.

His work in New York in the 1950s and 1960s led to the formation of Teen Challenge – a nationwide ministry to reach out to people with life-controlling habits. Teen Challenge has grown to include 173 residential programs and numerous evangelism outreach centers in the United States, and 241 centers in 77 other countries. The program claims a recovery rate of 86 percent.

The story of Wilkerson's first five years of ministry in New York is told in "The Cross and the Switchblade," a book he co-authored in 1963. The book became a best-selling phenomenon and more than 15 million copies have been distributed in over 30 languages.

"God is judging the raging sins of America and the nations," claims Wilkerson. "He is destroying the secular foundations." Wilkerson urges everyone to stockpile a 30-day supply of food and other necessities to deal with the catastrophe he foresees.

"I do not know when these things will come to pass, but I know it is not far off," Wilkerson concluded in his message. "I have unburdened my soul to you. Do with the message as you choose."

A past vice president of the Southern Baptist Convention is hoping believers pay attention to Wilkerson's message.

"I have known David Wilkerson for more than 25 years as well as many of his friends and associates," said Pastor Wiley Drake. "He is a godly man and I believe he is listening to God. I encourage each Christian to read and heed what God is saying through our brother."