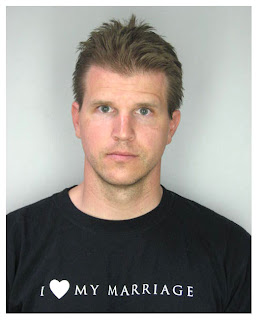 Ahh, love and hate are end members of the same emotion.

Dude, what were you thinking?

--A Florida man wearing an "I ♥ My Marriage" t-shirt was arrested last night for allegedly choking his wife during an argument in their Tampa-area home. Bradley Gellert, a 32-year-old financial consultant, was busted by Hillsborough County Sheriff's Office deputies and booked into jail on a felony domestic battery by strangulation charge.

According to a police report, Gellert, pictured in the accompanying mug shot, got into an argument with his wife and "screamed at the victim and threw numerous items." He then allegedly "grabbed the victim's neck and strangled her," which "prevented the victim from breathing normally."

Gellert's wife subsequently fled the couple's Apollo Beach home and went to a nearby sheriff's office to report the incident. Investigators noted that the woman had been "taken to the ground by the arrestee and suffered an abrasion to her knee and red marks on her neck."

The "I ♥ My Marriage" shirt was a promotional item tied to the 2008 movie "Fireproof," a Christian-themed film starring Kirk Cameron. The movie, a hit in evangelical circles, centers on a fireman's religious awakening and his simultaneous effort to save a failing marriage.
Posted by Sam at 7:03 AM