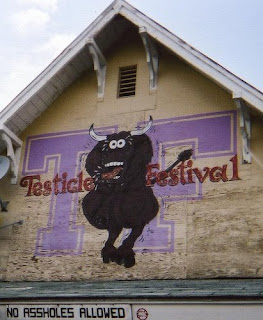 Just gag me with a spoon.


Diners can 'have a ball' at testicle festival

OAKDALE, Calif. (AP) – The fundraising idea may seem a little nuts, but Oakdale's annual Testicle Festival is always a big hit. On Monday, volunteers with the town's Rotary Club plan to fry up 400 pounds of the private parts of bulls and serve them to diners who pay $50 apiece for the sit-down meal.

The event, whose proceeds also benefit the Oakland Cowboy Museum, has drawn an average of 450 people and last year raised $28,000.

It's common practice on cattle ranches for young male bovines to be castrated into steers, which after the initial loss, eventually makes them more docile and easier to handle. Fans of the delicacy, also referred to as "mountain oysters," come from around the state.

According to Rotarians, everyone who buys a ticket is guaranteed to "have a ball."