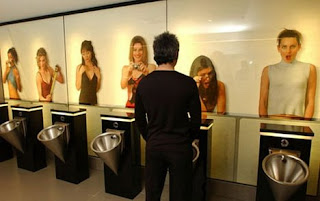 How stupid is he? At least stupid enough to have caught himself on his own camera.

Police in New Paltz, N.Y. are looking for the man who set up this video camera inside a Starbucks unisex bathroom, but then wasn't smart enough to make sure not to film himself.

It was a creepy version of candid camera at an upstate New York Starbucks.

A snooping device was placed next to the toilet to catch unsuspecting customers.

But you won't believe who got caught instead.

It's a simple story here with an ironic twist.

Last week, at the Starbucks in New Paltz someone put a spy camera inside the unisex restroom, set up to catch intimate video of total strangers. That's the bad news. The good news is the camera was recovered, the police have it and it was running when the guy set it up.

In other words, he took video of himself committing the crime.

The video showed a real artist at work. He positioned the little camera just so to catch what he was looking for.

The device is all of 2 inches long and records up to six hours of video and sound.

But it's easy to turn on by mistake. In this case it was a big mistake. You could call it poetic justice.

"I think its absolutely beautiful," said Lt. Steve Osarczuk of the New Paltz Police Department. "The footage that he wanted to get to hurt somebody else is now in our hands and we can use it to hurt him."

The suspect is 6-feet tall, 35 to 40 years of age, dark hair, bearded, with a mustache, horn rimmed glasses and a ponytail halfway down his back.

The search is on for this real genius criminal.

CBS 2 HD asked around, but nobody seemed to know who he is.

When Liam O'Neil was asked is he could fathom something so ridiculous, he said "Yeah. He took his own mug shot."

Police now want to capitalize on their good fortune.

"It was by luck that this employee saw this camera and I don't know how times people have not seen the camera," Lt. Osarczuk said, adding he believed the suspect had set up the camera before.

An employee recovered the camera a week ago Tuesday but the people at Starbucks inexplicably waited two days before turning it over to cops and now they're asking for your help.

If you know the guy's whereabouts, please give the New Paltz Police a call at (845) 255-7123. Police said if the suspect is local they are pretty sure they'll catch him.

Police said the camera was found several hours after it was planted, but not before one customer was videotaped using the bathroom.
Posted by Sam at 7:35 AM