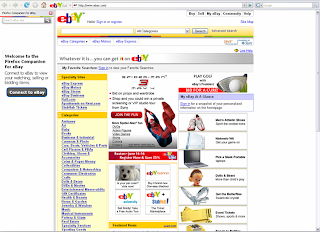 See? If he had been surfing the Internet while driving his car he wouldn't have to speed.

Man Says He Was Speeding To Make Bid On eBay
KIROTV.com

SEATTLE -- A 46-year-old Fall City man was arrested on charges of reckless driving after he was observed traveling 110 mph, said the Washington State Patrol.

James Garrett told the trooper that he was trying to get home to make a bid on eBay before the auction closed, said Trooper Dan McDonald.

A trooper saw Garrett’s vehicle traveling at a high rate of speed Monday night as he was passing other motorists in the express lanes of eastbound Interstate 90. Garrett was clocked at 100 mph.

While trying to catch up with Garrett, the trooper got a second radar reading of 110 mph, McDonald said.

Garrett eventually stopped and told the trooper he was late placing a bid on eBay. His vehicle was impounded and he was booked into the King County Jail on reckless driving charges.

Garrett has multiple criminal convictions for driving-related offenses, McDonald said.
Posted by Sam at 7:51 AM