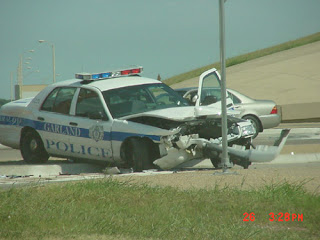 Our thoughts and prayers are with the deputy.

Please be careful out there.

A Comal County sheriff’s deputy and another woman were flown to the hospital Friday evening after a traffic accident.

A 47-year-old woman driving a Toyota Tundra collided into the side of the 32-year-old deputy’s vehicle near the 3000 block of Farm-to-Market 2673, Emergency Services District No. 3 spokesman Captain Jeff Schultz said.

Both women were transported by Air Life to University Hospital in San Antonio with non-lifethreatening injuries, Schultz said.

ESD No. 3 and Texas Department of Public Safety responded to the scene at 5:07 p.m., and Schultz said they had it cleared by 5:54.

Nearby residents, however, said police were on the scene late into the night.

The deputy had been working at the sheriff’s office for almost three years, and had been a deputy for almost one year, Reynolds said. She was on-duty at the time of the wreck.

As of Friday night, she remained at University Hospital in an undisclosed state.
Posted by Sam at 6:43 AM