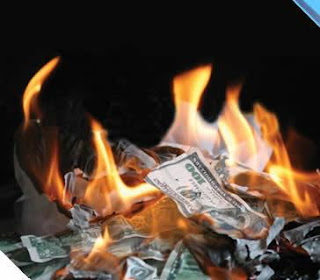 What are we up to now? 3-4 TRILLION dollars?

Excuse me while i go freak out some more.

WASHINGTON -- Senate Banking Committee Chairman Christopher Dodd is moving to allow the Federal Deposit Insurance Corp. to temporarily borrow as much as $500 billion from the Treasury Department.

The Connecticut Democrat's effort -- which comes in response to urging from FDIC Chairman Sheila Bair, Federal Reserve Chairman Ben Bernanke and Treasury Secretary Timothy Geithner -- would give the FDIC access to more money to rebuild its fund that insures consumers' deposits, which have been hard hit by a string of bank failures.

Last week, the FDIC proposed raising fees on banks in order to build up its deposit insurance fund, which had just $19 billion at the end of 2008. That idea provoked protests from banks, which said such a burden would worsen their already shaken condition. The Dodd bill, if it becomes law, would represent an alternative source of funding.

Mr. Dodd's bill could also give the FDIC more firepower to help address "systemic risks" in the economy, potentially creating another source of bailout funds in addition to the $700 billion already appropriated by Congress.

Mr. Bernanke said in a Feb. 2 letter to Mr. Dodd that such a "mechanism would allow the FDIC to respond expeditiously to emergency situations that may involve substantial risk to the financial system."

The FDIC would be able to borrow as much as $500 billion until the end of 2010 if the FDIC, Fed, Treasury secretary and White House agree such money is warranted. The bill would allow it to borrow $100 billion absent that approval. Currently, its line of credit with the Treasury is $30 billion.

The FDIC's deposit-insurance fund has fallen precipitously with 25 bank failures in 2008 and 16 so far in 2009. Some bank failures have a bigger impact on the fund than others, as IndyMac's failure cost the fund more than $10 billion, while many others cost the fund less than $100 million.

Ms. Bair said a change in the law would give the FDIC more options to determine the best way to rebuild its depleted fund. In an interview, she stressed that all insured deposits were already backed by the "full faith and credit of the United States government."

A change in the law would ease "the mechanics of how seamlessly we can access our lines of" funding. "I'm the kind of person that likes to be prepared for all contingencies," she said.