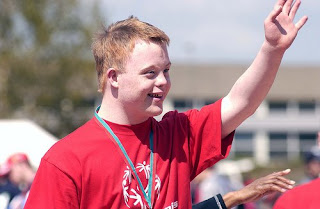 Not a particularly bright thing to say.

I guess his teleprompter went off message.

And before you get all 'huffy' with me about this posting what would you have been saying if president Bush had said this, in this way?

President Obama Jokes About Being a Bad Bowler: 'It's Like the Special Olympics'
ABC News-- MichaelJames

The first appearance by a sitting president on "The Tonight Show" may well end up being the last.

President Obama, in his taping with Jay Leno Thursday afternoon, attempted to yuk it up with the funnyman, and ended up insulting the disabled.

Towards the end of his approximately 40-minute appearance, the president talked about how he's gotten better at bowling and has been practicing in the White House bowling alley.

It's "like the Special Olympics or something," the president said.

When asked about the remark, the White House said the president did not intend to offend.

"The president made an off-hand remark making fun of his own bowling that was in no way intended to disparage the Special Olympics," White House deputy press secretary Bill Burton said. "He thinks the Special Olympics is a wonderful program that gives an opportunity for people with disabilities from around the world."

Facing tough questions about the performance of his Treasury Secretary, $165 million in bonuses for AIG officials and anticipating a fight over his $3.55 trillion budget, the president has not had a particularly good week, and it's unlikely this will help matters.