To egg or not to egg....that is the question 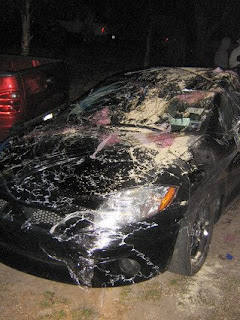 Carried things a wee bit too far I'd say.

I bet alcohol or marijuana consumption was involved as well.

Three Groveland teens were arrested on March 19, 2009, and charged with vandalizing this 2008 Mitsubishi. They called it a prank. Authorities are calling it a felony.

A group of Lake County teens is learning the hard way that actions have consequences. Three of them were arrested yesterday for allegedly vandalizing a Webster girl's car earlier this month.Blake Harper, 18, Kyle Grindrod, 18, and Justin Walls, 18, all of Groveland, were each charged with one count of felony criminal mischief. All three were released from the Lake County Jail last night after posting $5,000 bond."

They caused over $1,000 worth of damage so it's a felony offense," said Sgt. John Herrell of the Lake County Sheriff's Office. "We take those seriously."
Authorities say that the three were part of a group of a dozen teens between the ages of 15 and 18 who trashed the 17-year-old victim's 2008 Mitsubishi Eclipse on the night of March 7. Four juveniles who were involved in the incident will also face charges, Herrell said.

According to a police report, the victim was at a friend's house in Clermont, and when she came outside, she found her car covered in silly string, syrup, oatmeal, toilet paper, and plastic wrap. One of the suspects later told a deputy that the teens also keyed the car, wrote expletives and drew obscene images on it, and urinated in its air vents, according to the report.

"It was mean and hateful," said the victim's mother, Amber Ramirez, 34. "If any of their parents were in my shoes they would feel the same way."

Ramirez said that the teens caused $1,250 worth of damage to her daughter's car.

One of the suspects told deputies that that the teens targeted the victim because she is the ex-girlfriend of one of the group's members.

A woman who answered the phone at Harper's home declined to comment. Grindrod's home phone number has been temporarily disconnected. Walls could not be reached for comment.

"I'm sure that none of those kids thought they could go to jail for this," Ramirez said. "I would hope that they learn from it."
Posted by Sam at 7:33 AM