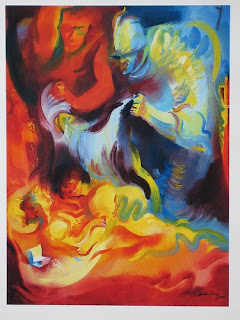 No recession in horrors for the past weekend.

May the girls rest in peace.

MILTON, Mass. (AP) -- With her long hair and model's poise, 17-year-old Samantha Revelus exuded confidence when she recited an original poem Saturday afternoon about a strong woman who stood up to "ignorant souls."

An hour after she finished rehearsal for an upcoming poetry reading, Samantha was dead on the floor of her family's home. She had been stabbed, police say, by her 23-year-old brother. Kerby Revelus then decapitated his 5-year-old sister as her birthday cake from the day before sat on the kitchen table, before turning on his 9-year-old sister, who called police.

Responding officers broke down the door and shot him dead. The first one inside had witnessed Bianca's beheading.

Sarafina was hospitalized Sunday with defensive wounds to her hands and stab wounds in her abdomen and one of her legs.

"In policing, we see the raw human emotion every day, but to think that a human being could afflict such an atrocious, violent act on his own family is unbelievable," Milton police Chief Richard G. Wells Jr. said Sunday. "When I walked up to the first officer (on the scene), I could see the whole story right in his face. This just told me that this was something very bad."

Investigators believe Revelus had been agitated since Friday night, when he got in a fistfight with a neighbor in this tony suburb that is also home to Massachusetts Gov. Deval Patrick. Revelus, investigators believe, may have targeted Samantha in the fallout from the episode.

"Blows were exchanged," Wells said. "I don't know the cause of it, but we're confident that did happen. He had been agitated in the hours that followed that, going into the day and last night."

Samantha's classmates referred to her by her nickname, "Princess," and remarked at her grace, class and friendliness. She had been one of about 20 students who had been at the high school Saturday afternoon to rehearse for a poetry jam on Thursday. Samantha also had practiced for a school fashion show earlier that morning.

"She had a stage presence like you couldn't believe," classmate Kassi Stein said.

Sobbing, she added: "She had just a soft voice and everyone would lean in to hear what she was saying."

But Samantha's poetry was bold and assertive. In "Acquaintance," she closed: "So what lousy wind brought you here? What values you offer? She's a woman, a queen, a goddess. Don't treat her like any other."

Investigators believe Revelus attacked his siblings with a household knife while their grandmother, who neighbors say lives on the first floor, was doing laundry in the basement. The children's parents were away; their mother is a nurse at a Boston hospital, Wells said.

Sarafina, a student at the Tucker Elementary School, just behind the house, called 911 just before 5 p.m. An officer on patrol in the neighborhood arrived within a minute, Wells said, and could hear an altercation inside as he reached the second floor. The 911 operator tried to persuade Sarafina to open the door, but when she didn't the officer broke through.

"As the officer entered the door, (Revelus) decapitated (Bianca) in front of him," Wells said. "He actually walked into a killing field. He walked into such carnage, as far as the atrocity of it, I've never seen it."

Within moments, four officers were inside and two of them shot Revelus as he tried to get to Sarafina, Wells said. Revelus fell, still clutching the knife.

Details about the number of shots and who killed Revelus were pending the outcome of an autopsy Sunday.

Revelus had recently served jail time on a gun charge, Wells said, but the details would not be released until courts opened Monday. Neighbors said Revelus was in a car that was pulled over by police and from which one occupant threw a gun into a sewer.

Police had been called to the family's house in 2004 after a domestic violence report that Revelus had punched a woman living there, Wells said.

"It's shocking to me," said Norm Walsh, whose son is the same age as Revelus. "He played a lot of pickup hoops in the driveway."

Walsh said the family had lived in the neighborhood for over 20 years and was warm. They were of Haitian descent, like many in a neighborhood where Creole is spoken alongside English.

"The family is a solid family. Both parents worked; good kids. Completely makes no sense," he said.

A two-hour grief counseling session was held at the school Sunday afternoon and will be offered Monday to students and employees.

The officers involved in the case were placed on administrative leave and were receiving stress counseling from the Boston Police Department.