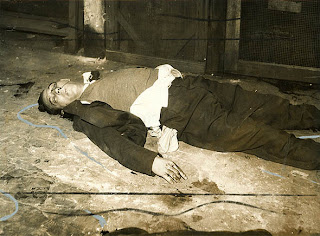 Open season on the citizens of New Mexico?

You can go on a raping/murdering/robbery spree and then get to live at taxpayers expense the rest of your life.

I know, let's ask the gentleman in the photo what he thinks?

The new law replaces lethal injection with a sentence of life in prison without the possibility of parole. The repeal takes effect on July 1, and applies only to crimes committed after that date.

"Regardless of my personal opinion about the death penalty, I do not have confidence in the criminal justice system as it currently operates to be the final arbiter when it comes to who lives and who dies for their crime," Richardson said.

The American Civil Liberties Union called it "a historic step and a clear sign that the United States continues to make significant progress toward eradicating capital punishment once and for all."

"I'm worried for our law enforcement officers who are out there courageously doing their job every night. We've lost a layer of protection and it's a sad day in New Mexico," Bernalillo County Sheriff Darren White said.

New Mexico becomes only the second state after New Jersey to ban executions since the U.S. Supreme Court reinstated the death penalty in 1976. Fourteen other states do not impose capital punishment.

The repeal passed the state Senate by a 24-18 vote Friday and was approved by the House a month earlier. With Richardson facing a midnight deadline to decide whether to sign or veto the legislation, he said he made the decision in the late afternoon after going to the state penitentiary.

There he saw the death chamber and visited the maximum security unit where those sentenced to life-without-parole could be housed.

"My conclusion was those cells are something that may be worse than death," the Democratic governor said at a news conference in the Capitol. "I believe this is a just punishment."

The governor also caught a glimpse of one of the two men on death row, Robert Fry. The repeal doesn't affect the death sentences of Fry or the other inmate, Timothy Allen, and Richardson said he wouldn't commute those sentences.

"More than 130 death row inmates have been exonerated in the past 10 years in this country, including four New Mexicans - a fact I cannot ignore," he said.

"Even with advances in DNA and other forensic evidence technologies, we can't be 100 percent sure that only the truly guilty are convicted of capital crimes."

Currently, New Mexico allows for the death penalty for certain murders, including killing a child, a law enforcement or correctional officer and a witness to a crime. New Mexico has executed one person since 1960.

The governor solicited input over the weekend from state residents. He said he got to 12,000 responses by phone, e-mail and visits, with more than three-fourths in favor of repeal.

"It was never popular in New Mexico," said Patrick Tyrell, a social worker and longtime lobbyist for repeal whose brother-in-law was murdered in 1984.

Roman Catholic Bishop Ricardo Ramirez of the Diocese of Las Cruces, said the governor "has made New Mexico a leader in turning away from the death penalty with all its moral problems and issues of fairness and justice."

A former congressman and member of President Bill Clinton's cabinet, Richardson said he was disturbed that death rows contain so many minorities. And, from a foreign policy perspective, the death penalty "did not seem to me to be good moral leadership and good foreign policy."

"This is a milestone that will make other states stand up and take notice," said Larry Cox, executive director, Amnesty International USA.

In Montana, a proposed ban has cleared the Senate and is pending in the House. In Kansas, a bill failed to clear the Senate this week.