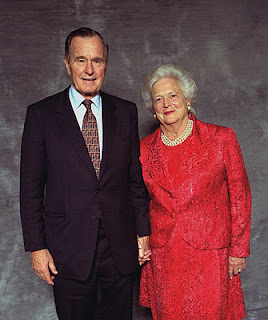 Godspeed to you on your journey of recovery Barbara Bush.

HOUSTON — Former President George H.W. Bush said Thursday he was a “nervous wreck” when his wife and former first lady Barbara Bush was scheduled for open-heart surgery to replace her aortic valve, a process that doctors said went extremely well.

At a news conference Thursday at The Methodist Hospital, where doctors performed the surgery, Bush began to cry when he said three former presidents, including his son, and President Barack Obama phoned him to send their wishes.

“There’s a lot of interest because of who she is,” Bush said. Besides hearing from his son, former President George W. Bush, the 41st president of the United States also heard from former Presidents Carter and Clinton, he said.

“It makes a difference. They know her and like her and care about her.” Mrs. Bush underwent surgery Wednesday. The operation was scheduled last week, after Bush, 83, reported shortness of breath. Doctors diagnosed a hardening of the aortic valve, during which the valve narrows and obstructs blood flow.

“The surgery went extremely well,” said Dr. Gerald Lawrie, the surgeon who replaced Bush’s aortic valve with a biologic valve during a 62.1/2-hour procedure. “I expect her to recover fully and soon resume her normal activities.”

Mrs. Bush was admitted Tuesday night and is expected to stay in the hospital for a week to 10 days.

Family spokesman Jim McGrath said Mrs. Bush was awake, alert and talking in the intensive care unit Wednesday night, with her husband by her side.

She was originally not sure the surgery was serious enough to announce publicly, but was convinced otherwise Wednesday, McGrath said. She also didn’t want her children to know.

“I am very impressed with and grateful to the wonderful team of doctors and nurses at Methodist Hospital who have helped Barbara,” her husband said in a statement. “We have every confidence she is in the best hands.”

The surgery was performed a little more than three months after Mrs. Bush was admitted to Methodist with a perforated ulcer. She is completely recovered from that surgery, doctors said, and Wednesday’s heart surgery was unrelated.

Hardened aortic valves need to be replaced because, if left untreated, they can result in heart failure or sudden death.