White lines in the road 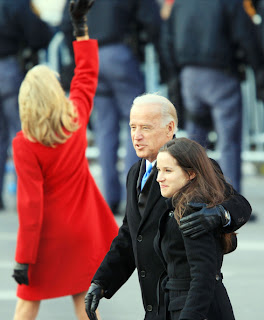 Oh well, it will probably all 'blow' away.

An explosive video being shopped to media outlets has plunged the White House and Vice President Joe Biden into a cocaine scandal, RadarOnline.com has learned exclusively.

The video shows a woman, who is represented by the seller and his attorneys to be Biden’s daughter Ashley, snorting several lines of cocaine.

The tape has been viewed by a RadarOnline.com freelance reporter who confirms the woman looks identical to Ashley Biden.

Tom Dunlap, an attorney for Dunlap, Grubb and Weaver in Washington D.C. is representing the seller of the tape in brokering a deal and several news organizations have seen the footage.

In addition to RadarOnline.com, representatives for the New York Post, a large British newspaper and the National Enquirer have all viewed the tape.

The woman on the tape clearly resembles Ashley Biden, 27, who is a social worker employed with the Delaware Department of Children, Youth and Families. She is also a board member of the Delaware YWCA organization.

The tape was shot this year.

On the tape a man cuts up five lines of what is said to be cocaine. The woman who the seller says is Ashley then jokes with the man that the lines aren’t big enough.

The man hands her a rolled-up dollar bill and she proceeds to walk a few steps to a table where the cocaine is cut. She pulls her hair back, bends down and snorts a line.

Four lines of white powdery substance are clearly visible on the table, which is in front of a computer.

After she snorts the first line, the woman said to be Ashley lifts her head and wipes her nose. She then snorts a second and third line before the tape cuts off.

The tape was made without her knowledge. It is being shopped for $250,000.

The events on the tape are represented as taking place at a party in Wilmington, Delaware and the woman said to be Ashley is with a boyfriend.

The cocaine is done amid a party scene with loud music playing and several people talking at the same time.

The tape is approximately two minutes in length.

News clips show that Ashley Biden was once arrested for marijuana possession while she was a college student in New Orleans in 1999. The charges were later dismissed.

In 2002, The Los Angeles Times reported that Ashley, then 21, was arrested on a misdemeanor charge of obstructing a police officer outside a Chicago bar.

RadarOnline.com is attempting to reach Ashley Biden for comment.