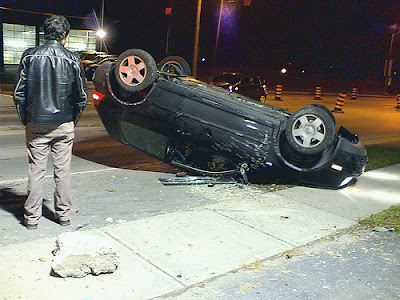 I am not going to jump to conclusions but I am willing to bet drinking was involved.

At least no one else was hurt.

Oh and if it wasn't drinking and/or some other type of intoxication I apologize.

UPDATE:  (11/9/2012)  It seems from this morning's report she was driving so fast that the speed bump flipped her SUV.  I wonder how fast that would have to be?

A woman died this morning after rolling her SUV, striking a utility pole and crashing through a West Side home's chain link fence.

Police at the scene said the woman was southbound on Juanita Avenue near Merida Street about 4 a.m. when she lost control of her SUV. Nobody in the home was hurt.

Officers said the woman, believed to be in her 30s, appeared to have been speeding