None of the news it prints seems fit anymore 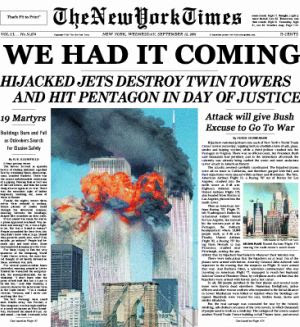 Does the Editorial Board of the New York Times not read and think about what they take a stand on?

The Privilege to Speak

In an editorial today, the Times Co.'s eponymous flagship newspaper answers Justice Samuel Alito, who in a terrific speech last week at the Federalist Society in Washington penetratingly ("speciously," according to the Times) defended the court's 2010 ruling in Citizens United v. Federal Election Commission. That 5-4 ruling struck down portions of two laws that imposed government censorship on political speech by corporations and unions (though they made an exception for "media corporations" such as the New York Times Co. and News Corp., which publishes The Wall Street Journal and this website).

Alito elaborated an argument this column made in January 2010, just after he and his colleagues handed down Citizens United. He noted that many landmark free-speech decisions vindicated the rights of corporations, including two that involved the New York Times Co. Here's the company's response:


In New York Times v. Sullivan, in which the First Amendment was used to rein in the law of libel, the Supreme Court focused on the "profound national commitment to the principle that debate on public issues should be uninhibited, robust, and wide-open." It made almost no mention of the fact that The Times was a corporation. Nor were the free speech rights of a corporation any part of the ruling in the Pentagon Papers case.