The Truth? You can't handle the Truth 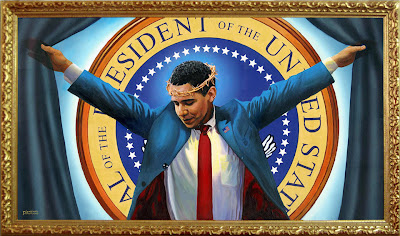 Obama as a martyred Messiah?  Probably not.

A painting that features President Obama posed as Jesus Christ crucified on  is on display at a community college art gallery in Boston.

The painting by Michael D’Antuono is part of a larger exhibit called “Artists on the Stump – the Road to the White House 2012.” It’s on display at the Bunker Hill Community College Art Gallery until Dec. 15th.


The painting is called “Truth” – and shows the president with his arms outstretched. A crown of thorns rests on his head.