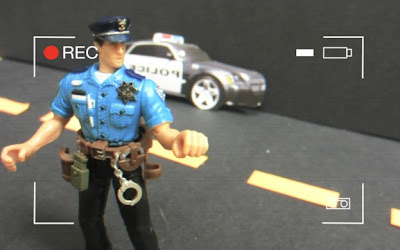 Sorry for not posting more the last few days but it sure seems as if the days now have less hours in them.  I have become extremely busy at work, and I am starting to teach a new class Tuesday evenings for the next several weeks and I've embarked on an exciting new project you'll hear more about in the next several months.

But enough of that.  Let's get busy.

IMHO there was no reason for the officers to do this, if the news article is correct.

A California man was jailed for four days for attempting to record police officers on a public street.

Daniel J. Saulmon was charged with resisting, delaying and obstructing an officer but the video shows he was standing well out the way of a traffic stop and was only arrested when he failed to produce identification to an approaching officer.

And there is no law in California that requires citizens to produce identification. And even if there was, it would require the officer to have a reasonable suspicion that he was committing a crime.