Step away from the phone! 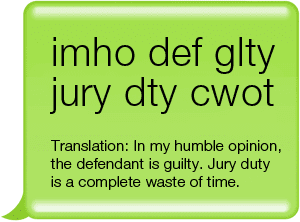 How stupid can some folks be?

No, don't answer that, it was just a rhetorical question.

SALEM, Ore. (AP) — A judge in Oregon noticed an unexpected glow on a juror's chest while the courtroom lights were dimmed during video evidence in an armed-robbery trial.

The juror, it seemed, was texting.

According to a news release from the Marion County Sheriff's Office, Kohler had no explanation for his actions.

Jurors in Oregon are given explicit instructions at the outset of each trial not to use cellphones in court.