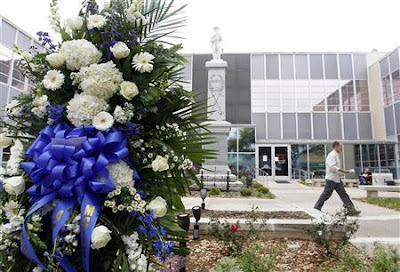 My sincerest apologies for not posting recently.  I've been mondo busy as well as very saddened by the murder of the Kaufman County, Texas DA Mike McLelland and his wife Cynthia over the weekend.

Hopefully they will capture those responsible for this and soon.

Our thoughts and prayers go out to the McLelland family and to our fellow prosecutors in Kaufman County and as well to the new interim Kaufman County DA, Brandi Fernandez.


Texas prosecutor steps into job after predecessor gunned down
Reuters -


(Reuters) - Brandi Fernandez slipped into the Kaufman County Courthouse in her first full day as interim district attorney on Tuesday, taking over a job that authorities believe got her predecessor and one of her colleagues killed.

Praised as a smart, tough litigator and a fierce advocate for child victims of crime, Fernandez declined to address reporters and remained under close protection inside the courthouse throughout the day. A police cruiser was parked outside her single-family home surrounded by trees on Monday and Tuesday.