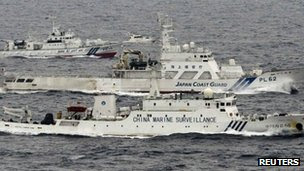 Anyone ready for a Sino-Japanese war?

Japan would respond with force if any attempt is made to land on disputed islands, PM Shinzo Abe has warned.

A flotilla of 10 fishing boats carrying Japanese activists was also reported to be in the area, as well as the Japanese coastguard.

Mr Abe was speaking in parliament hours after dozens of lawmakers visited a controversial war-linked shrine.

A total of 168 lawmakers paid their respects at the Yasukuni Shrine, which commemorates Japan's war dead, including war criminals, in a move likely to anger regional neighbours who say the shrine is a reminder of Japan's military past.