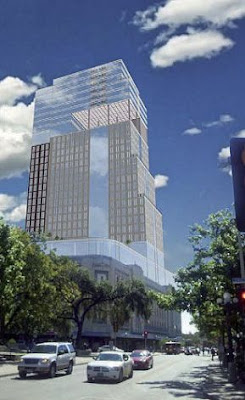 Get over it Councilman.

City Councilman Diego Bernal said Monday that while he welcomes development in his downtown district, he has reservations about the 23-story hotel and time-share tower that a Dallas-based developer wants to stack on top of the historic Joske's building.

“I'm not sure I like the idea,” Bernal said. “I didn't expect it to be that tall. The folks who are worried about it have a right to be. It's one of those things where you're not sure whether to be excited or horrified.”

Even before details of the project became public late last month, Historic Design and Review Commission members and local preservationists criticized the idea of building the high-rise at Alamo and Commerce streets and worried about its potential effect on the neighboring Alamo Plaza.