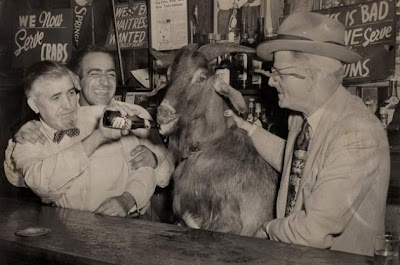 See I originally thought this was the start of a joke .....

"A goat walks into a bar in Montana and asks for a beer.  The bartender says that'll be $10.  The goat pays him and as the bartender is drawing the goat a beer he says; "You know we hardly ever see a goat in this bar"  The goat replies; "With prices like these, I'm not surprised!"

BUTTE, Mont. (AP) — So the goat that walked into a Montana bar last weekend ... was stolen from a petting zoo.

Fairmont Hot Springs Resort general manager Steve Luebeck says staffers knew the goat was missing but didn't realize it had been stolen until they saw a story in The Montana Standard on Wednesday reporting that a goat had been taken into a Butte bar early Sunday.

The pygmy goat, named "Shirley, was returned to the resort's petting zoo.