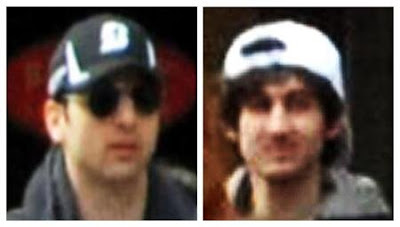 I sure hope they take the last one alive so we can figure out who is behind all of this.  (The one in the black hat is now dead)

Like why are Chechnyans coming here and doing this?

WATERTOWN, Mass. (AP) -- The two suspects in the Boston Marathon bombing killed an MIT police officer and hurled explosives at police in a car chase and gun battle overnight that left one of them dead and his brother on the loose, authorities said Friday as thousands of officers swarmed the streets in a manhunt that all but paralyzed the Boston area.

The suspects were identified by law enforcement officials and a family member as Dzhokhar and Tamerlan Tsarnaev, brothers from a Russian region near Chechnya, which has been plagued by an Islamic insurgency stemming from separatist wars.

Tamerlan Tsarnaev, known to the FBI as Suspect No. 1 and seen in surveillance footage in a black baseball cap, was killed in a gun battle with police in Massachusetts overnight, officials said. His 19-year-old brother - dubbed as Suspect No. 2 and seen wearing a white, backwards baseball cap in the images from Monday's deadly bombing at the marathon finish line - escaped.