Nobody couldn't forsee this? 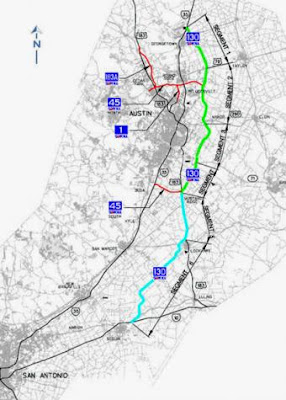 Perhaps its because its 30 or so miles east of San Antonio?

Why would someone drive all that way East to turn north?

Despite the enticement of the country's fastest speed limit, the Texas 130 toll road extension has drawn about half the number of drivers expected in its initial months of operation, a performance low enough that the private company that built it is facing a downgraded credit rating, according to Moody's Investor Service.

The Texas 130 toll road extension generated almost $2.6 million in toll revenue in the first six weeks that the road was opened, according to figures released Friday by the state.

At least 202,861 vehicles traveled on some portion of the road, between Interstate 10 in Seguin and Mustang Ridge south of Austin, in that same time period.