You're freaking kidding me, right? 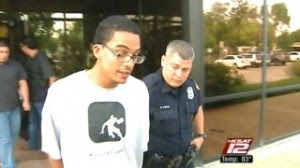 SAN ANTONIO - Police say a man identified as Sean Foxx, 27, proposed to his girlfriend, Treila Woods, 24, after the pair had just been arrested in connection with an aggravated robbery at a Family Dollar Store.

Investigators said Foxx was in a getaway car outside the store Monday morning waiting for Woods to come out.

Store managers claim Woods was shoplifting and attempted to stop her as she was leaving through a broken door. Foxx saw what happened and then went inside, police said.