Sometimes the law is an ass 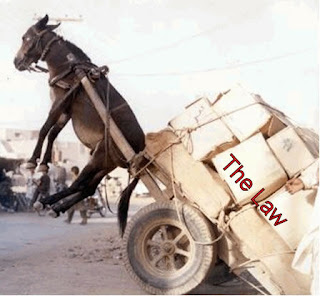 I'd still go out there and evict them how could the home possibly be placed in their bankruptcy estate when they do not own it?  And if they show me the bogus title I'd arrest them and the chicken-shit lawyer that drew up the phony-baloney deed in the first-place.


Colorado family unable to move into their house after squatters file for bankruptcy
By SUSANNA KIM- ABC News
Dayna Donovan and her family have been unable to occupy their home after two strangers squatting in her Littleton, Colo., home for eight months have filed for bankruptcy, preventing an eviction from the sheriff's department.

On July 12, a judge in Arapahoe County ruled that Veronica Fernandez-Beleta and Jose Rafael Leyva-Caraveo, the two people who were living in the home, had to move out in 48 hours.

Troy Donovan, 45, filed for a forced eviction with the Arapahoe County Sheriff's office on July 16.
However, Fernandez-Beleta filed for bankruptcy on July 20, which the Donovans learned about just hours before the scheduled eviction was to take place last week.

"The sheriff's office will not proceed with an eviction if there is a bankruptcy in question," Arapahoe County Undersheriff David Walcher told a local CBS television station.