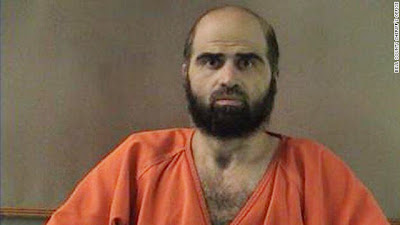 This has now crossed over to the point of being farcical and embarrassing.

His 13 victims lie in their graves waiting on justice to be served.

Nearly three years after being called the triggerman behind the worst shooting ever on a U.S. military post, Army Maj. Nidal Malik Hasan filed a statement with the court Wednesday saying he was guilty.

Wearing a scruffy beard that has prompted the judge to fine him five times, Hasan entered a motion stating that he wished to plead guilty for religious reasons.

The defense submitted a written motion that the judge, Col. Gregory Gross, quickly denied. Gross, who is barred by military law from accepting a guilty plea in capital cases, said he'd enter a not-guilty plea instead.

Before arguments could be made from both sides on that, a military appeals court intervened, delaying proceedings while it resolves a dispute over Hasan's beard. The court-martial was to start Monday.