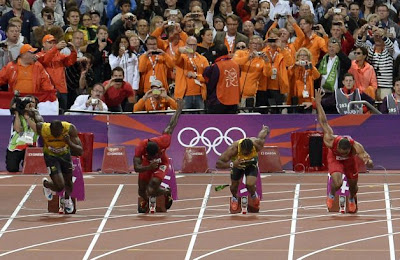 From the Urban Dictionary:

The antithesis of what a good boy should be - rude, obnoxious, violent and stupid. Formed by spelling 'boy' backwards, it was coined in England in the 18th century as it was very popular amongst upper-classes to speak backwards at the time.
Olympic officials condemn bottle throwing incident
By Gregory Katz - Associated Press
LONDON (AP) — Olympic officials on Monday sharply criticized a man arrested for throwing a plastic bottle on the Olympic track before Sunday's men's 100-meter final, but competitors said the unpleasant incident did not affect the showcase event.

Sebastian Coe, chairman of the London organizing committee, said there would be "zero tolerance" for anti-social behavior.

"Throwing a bottle on to the field of play is unacceptable, it's not just unacceptable at an Olympics Games but at any sporting event and anybody who does that will be removed," he said.