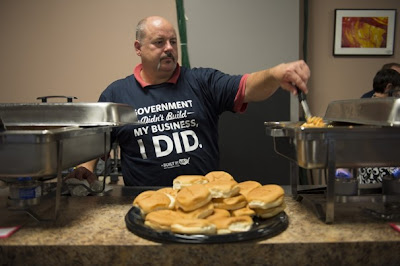 Guy's got some big ones.

And so the co-owner of the Village Corner Deli here agreed to cater Obama’s visit Wednesday — but not before donning a T-shirt blaring the message: “Government didn’t build my business. I did.”

It was a reference to a remark Obama made several weeks ago that his Republican opponent, Mitt Romney, has seized upon to portray Obama as anti-business. Obama, referring to the help government provides to businesses by building roads and providing education and other services, said, “If you’ve got a business — you didn’t build that."