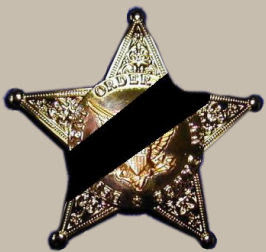 Rest in peace Deputy Josh Mitchell you and your loved ones are in our prayers.

A Reagan County Sheriff’s Deputy died after being shot in the West Texas town of Big Lake.
NewsWest9.com reports:


NewsWest 9 has confirmed that Reagan County Sheriff’s Deputy Josh Mitchell was shot and later died while being transported to a San Angelo Hospital.

A suspect barricaded himself in a home in Big Lake, after reportedly shooting a Reagan County sheriff’s deputy on Wednesday, according to the newspaper The Big Lake Wildcat.

The rest of the story: (Links to original article)
Posted by Sam at 7:48 AM