Trial to start soon but the trial tactics are beginning now 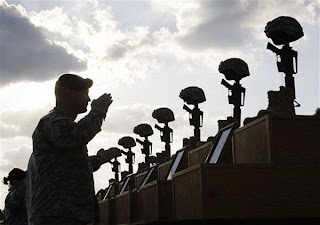 This will be an interesting trial.

Apparently in order to show contrition and remorse he may have to admit guilt if he testifies or at least his attorney will state it for him to try and stave off the enormous amount of eye-witness testimony.

Good luck with that ploy, not.  I think he'll be convicted and given the death penalty.

Veteran military attorneys say they think a capital murder trial is a virtual certainty for Maj. Nidal Malik Hasan, the Army psychiatrist charged with killing 13 people and wounding 32 others last year in a rampage at Fort Hood.

They will also tell you that his defense team, led by one-time Army judge John Galligan, has limited options, given the weight of eyewitness testimony — all geared to saving him from being executed.

Military rules forbid Hasan from pleading guilty in a capital case. But he might admit his guilt at the start of the trial in order to show contrition and counter the prosecution's plans to put on a series of damaging witnesses.