The cruise from Hell 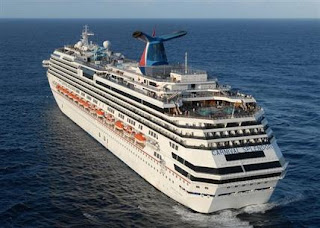 Boy, I sure would not have wanted to be on this cruise.

Not that I would go on a cruise as Mrs. Man o' Law gets wicked bad motion sickness even seeing a ship.

SAN DIEGO (AP) -- The nearly 4,500 passengers and crew of the Carnival Splendor have no air conditioning or hot water. Running low on food, they have to eat canned crab meat and Spam dropped in by helicopters. And it will be a long, slow ride before they're home.

What began as a seven-day cruise to the picturesque Mexican Riviera stopped around sunrise Monday when an engine-room fire cut power to the 952-foot vessel and set it adrift off Mexico's Pacific coast.

The ship began moving again Tuesday night after the first of several Mexican tugboats en route to the stricken liner began pulling it toward San Diego, where it was expected to arrive Thursday night, Carnival Cruise Lines said in a statement.