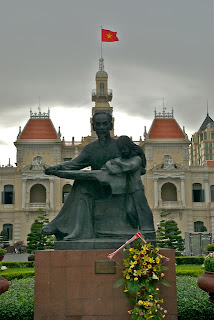 I could take the cheap shot.

You know, Pizzas, napalm baked, that sort of thing.

But I won't.  How many of you ever thought there'd be a Domino's Pizza in Vietnam, like ever?

Not me.  Does this mean, kinda, that we won after all?

, the second-largest pizza chain in the United States, has announced the opening of its first store in Vietnam, in the country's largest city, Ho Chi Minh City.

In an annoucement on Nov. 19, the company's Finance Chief Michael Lawton recognised Vietnam as a growing economy. He said Domino's had made forays into four new countries this year with the others being Germany, Romania and Ukraine.

"Opening our first store in the largest city in Vietnam gives us an excellent entryway into this growing economy," said Lawton.

"We are very excited that Domino's Pizza, the global leader in pizza delivery, is now in Vietnam and we look forward to providing that same level of service that our customers expect from this global brand.", said Tony Cricenti, Chief Executive Officer of Domino's Pizza in Vietnam.

Founded in 1960, Domino's Pizza operates a network of 9,169 franchised and company-owned stores in the United States and 66 markets worldwide. The Domino's Pizza brand had global retail sales of over US$5.6 billion in 2009, comprised of nearly US$3.1 billion domestically and over US$2.5 billion internationally.

During the third quarter of 2010, the company had global retail sales of nearly US$1.4 billion, comprised of over US$747 million domestically and nearly US$650 million internationally.
Posted by Sam at 6:36 AM