Surely he's not dead. Yes, he is and don't call me Shirley. 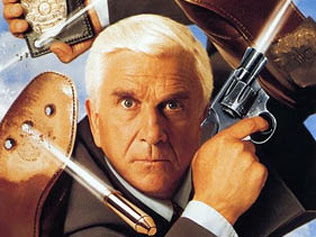 He reinvented himself as an actor, going from handsome serious leading man roles like his role as the Captain in the ground breaking science fiction classic Forbidden Planet to a comedic talent in Airplane and The Naked Gun series.

Leslie Nielsen, you will be missed.

FORT LAUDERDALE, Fla. (AP) — Leslie Nielsen, who went from drama to inspired bumbling as a hapless doctor in "Airplane!" and the accident-prone detective Frank Drebin in "The Naked Gun" comedies, has died. He was 84.

His agent John S. Kelly says Nielsen died Sunday at a hospital near his home in Ft. Lauderdale where he was being treated for pneumonia.

The Canadian-born Nielsen came to Hollywood in the mid-1950s after performing in 150 live television dramas in New York. With a craggily handsome face, blond hair and 6-foot-2 height, he seemed ideal for a movie leading man.

He quickly became known as a serious actor, although behind the camera he was a prankster. That was an aspect of his personality never exploited, however, until "Airplane!" was released in 1980 and became a huge hit.