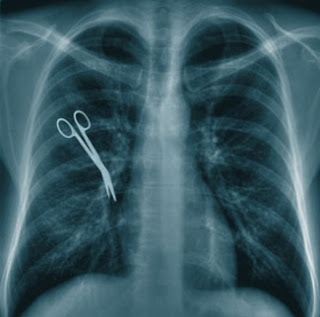 Having just had a kidney stone removed surgically, makes me queasy to think about what happened to this poor woman.

At least all my junk is present and accounted for after surgery.  Even though it hurts, bleh.

A NURSE present during surgery in which a woman's genitalia were removed, says the operation was not what the patient thought was about to happen.

Sharon Demmery told the District Court it was standard practice at the rural hospital that patients had to describe in their own words the procedure they believed would be carried out before going under anaesthetic.

In the case of Carolyn DeWaegeneire, removal of an area of genitalia, including the clitoris, was far from the surgery she had foreshadowed, Ms Demmery said.

Mrs DeWaegeneire's doctor, known only as GSR for legal reasons, has pleaded not guilty to maliciously causing grievous bodily harm during the operation in August 2002 and not guilty to excising her clitoris when there was no medical need.

He is claiming it was necessary to save her life.

Mrs DeWaegeneire, a widow aged 58 at the time of the operation, has said she was told it would be a ''simple'' operation to remove a small pre-cancerous lesion. But now ''nothing'' remained of her genital region.

She said the first time the doctor told her that her clitoris would also be taken was when he leaned in and said it ''for my ears only'' between the time she received the anaesthetic injection and fell unconscious.

Ms Demmery, an anaesthetic nurse, yesterday told the court that during the operation she noticed Mrs DeWaegeneire's ''entire external genitalia were taken'' and asked the doctor why he had removed so much.

When she realised the patient's clitoris had also been removed she had remarked to the doctor: ''You
wouldn't be taking mine.'' He allegedly replied: ''It doesn't matter anyway, her husband is dead.''

''When you saw the surgery that was being performed, was that what you believed the patient had explained to you [before the operation?]'' the Crown prosecutor, Margaret Cunneen, SC, asked. ''No,'' she replied.

The trial continues.
Posted by Sam at 9:35 AM