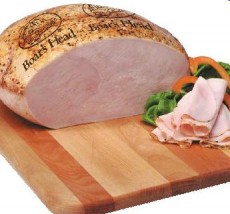 Gives a whole new meaning to stuffing the turkey.

A Brooklyn teen was caught on video shoving a 12-pound turkey breast into his baggy sweatpants -- and then waddling out of a Bed-Stuy grocery with an irate butcher hot on his trail, sources said yesterday.

"You have something in your pants!" Marte barked at Williams, who squealed back, "I'll give it to you -- don't touch me!"