Shutting down the protesters 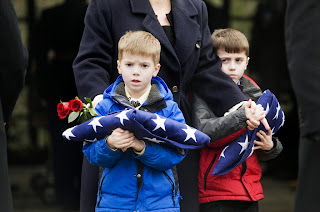 Standing up to these religious zealots and bullies.

Members of a small Missouri town banded together Saturday to block a controversial pastor and members of his Westboro Baptist Church from protesting the funeral of a fallen U.S. soldier, Fox4kc.com reports.

Hundreds of residents in Weston, Mo. -- as well as people as far away as California and Australia -- rallied in support of Sgt. First Class C.J. Sadell, who died from injuries suffered during a surprise attack in Afghanistan.

The residents sought to block Fred Phelps, leader of the Westboro Baptist Church in Topeka, Kan., and his followers from picketing Sadell’s funeral, according to the station.

Phelps' church has been the subject of intense criticism for holding more than 44,000 pickets at funerals and other events – including the services of fallen service members.

Citing their First Amendment right to protest, Phelps' followers say they use funerals as an “available public platform” to “deliver the message that there is a consequence for sin.” Phelps is openly opposed to homosexuality and all government policies they he says supports homosexuals.

"We got everybody here early so we could take up all the parking spots," Rebecca Rooney of Weston, Mo., told Fox4kc.com. "We did that so Mr. Phelps wouldn't have a contingency that was really close."

Sadell, who leaves behind a wife and two sons, was stationed in the Arif Kala region of Afghanistan when his unit was ambushed on Oct. 5. Five soldiers were killed in the attack and Sadell was badly injured.