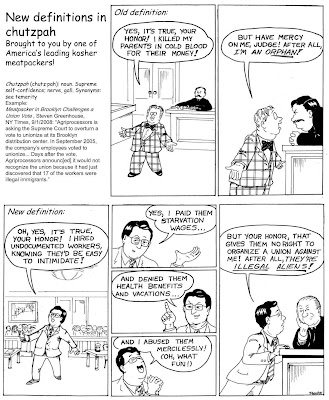 You get shock probation and then you complain that the Court had ordered you to pay the ill-gotten funds you had said was going to charity, to a charity?

Chutzpah (pronounced /ˈhʊtspə/) is the quality of audacity, for good or for bad. The word derives from the Hebrew word ḥuṣpâ (חֻצְפָּה), meaning "insolence", "audacity", and "impertinence." The modern English usage of the word has taken on a wider spectrum of meaning, however, having been popularized through vernacular use in film, literature, and television.

In Hebrew, chutzpah is used indignantly, to describe someone who has over-stepped the boundaries of accepted behavior with no shame.

The Fourth Court of Appeals issued a rejection Wednesday to a former San Antonio lawyer turned felon who objected to a judge's order that he pay $70,000 to a children's charity.

A jury sentenced Roberts to five years behind bars in 2007 for extorting $155,000 in hush money from four men who were having extramarital affairs with his wife and law partner, Mary Schorlemer Roberts. He told the men the money would go to a children's charity, but the couple instead used it on their law firm and a new home, prosecutors said.