The battle rages on 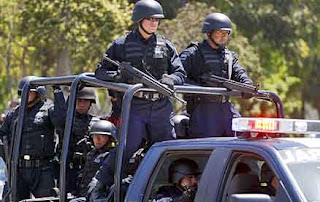 Major offensive against the drug cartel south of the Border.

BROWNSVILLE — One of Mexico's most powerful drug kingpins was taken down Friday in a spectacular military offensive that killed as many as 58 people and had residents in the border city of Matamoros cowering as gunbattles raged throughout their city.

Two members of the navy died in the battle, officials said. The website Blog del Narco reported 58 people altogether were killed in the fighting.