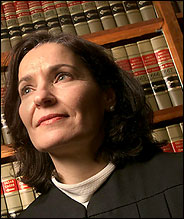 The Judicial Panel reviewing the Judicial Conduct's Commission issuance of a public warning against Judge Sharon Keller refused to reconsider its order dismissing the warning.

I imagine its decision will stand unless the Judicial Conduct Commission asks for an enbanc hearing,  If that is even possible.

AUSTIN – A judicial panel on Monday refused to change its decision to toss out a public warning issued against Presiding Judge Sharon Keller of the Texas Court of Criminal Appeals.

The State Commission on Judicial Conduct had issued the public warning because Keller refused to keep the court clerk's office open late as a condemned man, Michael Wayne Richard, sought to file a last-minute appeal of his execution in 2007.

Keller appealed the commission's action, and the three-judge panel threw out the warning. The panel said that because the commission had instituted formal proceedings, it did not have authority to issue such a sanction against Keller.