Better to be tried by twelve, than carried by six 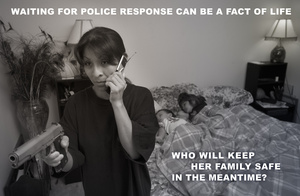 The Castle Doctrine is alive and well in Texas.

However, its use may carry some psychological cost to those who defend themselves.

Its still better than being killed, assaulted, or what have you.

She was jolted from her sleep by the sound of her bedroom door being ripped from its hinges with the powerful sweep of an intruder's leg.

Toni Hanes yanked a .38-caliber revolver from behind her mattress and pointed it at the stocky figure that stood motionless in her doorway.