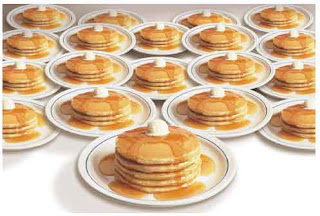 CINCINNATI—An Ohio judge has granted early release to an inmate who was fired from a jail's kitchen for handing out too many pancakes -- earning himself the nickname Mr. Pancake.
Heriberto Rodriquez was serving a sentence for stealing money from a concession stand at the Cincinnati Reds' ballpark. The Cincinnati Enquirer reports the kitchen job gave him three days credit for each day in jail.
Authorities say Rodriquez was supposed to give other inmates two pancakes each but sometimes gave them four.
Hamilton County Common Pleas Judge Melba Marsh had sentenced the 44-year-old Rodriquez to 180 days after he pleaded guilty to theft in August. On Wednesday she called him a "generous soul" and granted his request for release after 73 days. She told him to "get your big box of Aunt Jemima and eat all you want, Mr. Pancake."
Posted by Sam at 7:54 AM