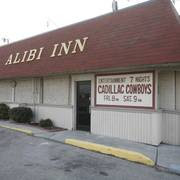 Not a very good place for an alibi was it?

LEWISTON, Idaho -- Police said it didn't take them long to locate an Idaho man suspected in the robbery of a Cedars Inn -- he was next door at The Alibi bar.

Lewiston police said 40-year-old Donald Mosley Jr. was arrested less than 15 minutes after he walked into the hotel and demanded cash from the desk clerk late Wednesday. Police found Mosley at The Alibi, a bar located next to the hotel.

The Lewiston Tribune reports this is the second time Mosley has been arrested in recent weeks.

In late October, police say he called in a fake fire report from a pay phone after he was declined a cup of coffee at a Lewiston fire station.

It was unclear if Mosley had hired an attorney Thursday, when various state and county offices were closed in observance of Veterans Day.
Posted by Sam at 7:20 AM