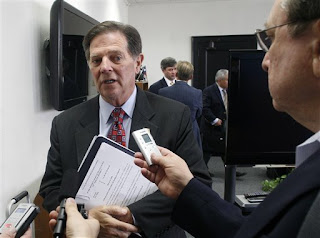 The political "trial of the century" continues in the People's Republic of Travis County.

AUSTIN — Prosecutors in the political money laundering case against former U.S. Rep. Tom DeLay are relentlessly building a circumstantial case, but as the sixth day of testimony ended Tuesday they still had not directly linked DeLay to the alleged scheme.

That could change as early as today as prosecutors prepare to give the jury statements DeLay made to investigators in 2005, indicating he knew of a $190,000 money swap before it occurred.

DeLay said he is not concerned about the statements because he misspoke at the time and can prove he did not know about the money exchange until after it happened.