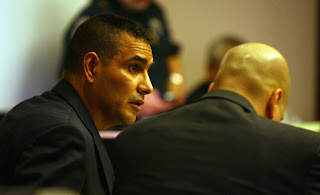 Seaton, 45, who had been with the San Antonio Police Department for two years when the wreck occurred Nov. 28, 2008, stared somberly as state District Judge Sid Harle read the verdicts.

Jurors took less than two hours to find Seaton guilty of two counts of aggravated assault by a police officer, which is punishable by up to life in prison, and one count of manslaughter, for which he faces up to 20 years in prison.