Does he have a visa to enter? 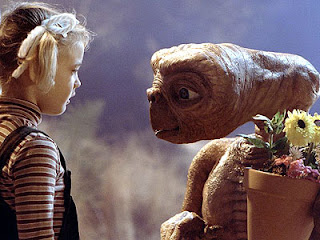 President Obama is in India and apparently E.T. is in the Washington D.C. area.

CENTREVILLE, Va. - Some people in Centreville are talking about a bright blue light spotted moving in the sky Wednesday night. But no one seems to have an explanation for this unidentified flying object.

It was in the night sky just above Lee Highway when shoppers looked up and saw something weird in Centreville and it was all of it caught on camera.

\“All of a sudden, it would stop and go back like this,” said Bryan Fains, using his finger to point out the direction of the blue light in the sky. “At one point, it stopped and went up and up.

Fains quickly grabbed his phone, turned on the camera and recorded the erratic blue light in the night sky. It flew around for about 10 minutes.

“[There] was no sound. It was a distinct blue light. It never flashed or blinked or nothing. It was just blue,” said Fains. “It’s weird. You only see this type of stuff in movies. Just as long as we're here, I'm sure there are other things somewhere.

Fains has not seen it since. Only just the occasional airplane from Dulles Airport. He is all too familiar with those flying objects and their loud sounds. Fains says this one had no sound. The apparent UFO sighting has him baffled.
Posted by Sam at 7:45 AM